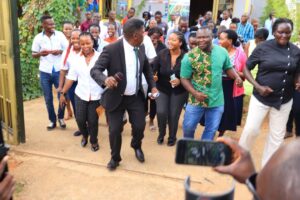 The full title of this project is – “Maintaining Civil Society Space in Uganda through capacity building, gaps reduction and government – CSOs constructive dialogue”. It goes out to provide an alternative process for restoring the operational space of the affected CSOs, as well as others that could be in danger over the months and years to come. We want to start/activate a CSOs – Government authorities interaction platform where sustained structured dialogue between CSOs and regulatory bodies will be initiated and facilitated, with the ambition to bring the two estranged sides closer to each other.

On August 20, 2021, Uganda’s National Bureau for Non-Governmental Organizations (NGO Bureau) suspended operations of 54 organizations for alleged non-compliance. The 54 organizations have a strong representation of youth-led agencies that are engaged in governance, accountability, participation, and service delivery monitoring. This strengthens an ongoing concern regarding efforts by the state to constrain the space for civil society actors through law enforcement. Previously (2021 – 2000), over 13 NGOs engaged similar issues/topics have had their offices broken into, bank accounts frozen and staff arrested on flimsy charges using the Anti-Money Laundering Act (2013) and the Nongovernmental Organizations Act (2016). The increasing clamp-down on NGOs has led to self-censorship thereby undermining their capacity to engage in especially advocacy.

In Uganda and probably similar contexts elsewhere, information on compliance is commonly scanty to many CSOs. This is both because it is constantly changing, and there is limited use of easy to access, CSOs friendly information channels by the authorities. This commonly comes in long gazettes and text heavy documents that defeat actors that aren’t used to heavy reading. This mainly affects periphery civil society actors with operations long distances from authority offices. Furthermore, the relation between CSOs and authorities also suffers from a culture of power imbalance – on one side the authority forms rules and punishments for non-compliance, and on the other CSOs under a culture of fear/respect for authority, fail to take up the dialogue for a conducive space. This creates animosity and incongruencies ending into a situation like we have now.

Dialogue on developments in the CSO sector, and how such CSO actors interact with such developments and changes has a fundamental role in closing such gaps and building confidence on both sides.

Our project has two specific objectives as follows:

The project is a consortium of three organizations across Uganda and Denmark as follows: