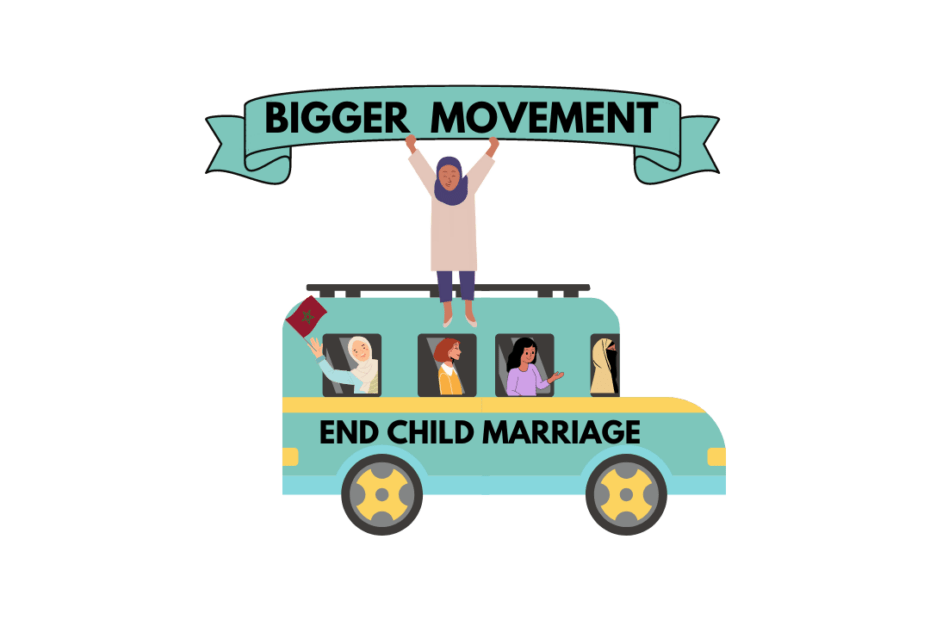 Project Soar and Civil Connections are beginning working together on BIGGER, a movement that aims to close legal loopholes to child marriage in Morocco by 2025. But why is this such important work? This article lays out why child marriage is such a critical issue in Morocco.

Child marriage has been a critical issue in Morocco. Unicef defines child marriage as “any formal marriage or informal union between a child under the age of 18 and an adult or another child.” Child marriage is considered a violation of human rights where girls are mostly the biggest victims. In an attempt to prevent child marriage and advance women’s status in Morocco, the Moroccan government reformed the Family Law in 2004.  The reforms set the legal age for marriage to be eighteen for both men and women, whereas the legal age previously was eighteen for men but fifteen for girls. They also changed the obligation of having a Wali (Legal Guardian) for the marriage to be valid; now the bride can validate herself to marry. These reforms were indeed praised by scholars and feminists and were seen as a progressive step towards women’s emancipation. However, these reforms were still a concern since they have legal loopholes that allow the continuation of child marriage.

Child marriage can be driven by several reasons within Moroccan society. Poverty is considered one of the main reasons why child marriage is happening in Morocco since parents attempt to marry their daughters to relieve the financial burden. Social norms are also considered another crucial factor as to why child marriage persists in a subset of Moroccan society. Since sex outside of wedlock is forbidden, parents tend to encourage or sometimes force their daughters to get married before the legal age only to preserve the family honour and avoid the shame of having a daughter engaging in premarital sex. Furthermore, marriage in Morocco is seen by some to have a beneficial social and financial impact on the girl’s life and the reputation of her family. Culturally, marriage in morocco has a very profound weight, in a way that girls are encouraged to marry as early as possible because otherwise their chances of getting married are reduced the older they get. Some people also see that the purity of those who stay unmarried for so long can be questioned as well.

Until now the government has still not succeeded in eradicating child marriage practices.

When the figures from after the introduction of the new legislation are compared with the figures from before the new legislation, there still do not appear to be any major changes. And the figures have remained almost the same.  This is mainly because the reforms have loopholes. The 2004 reform under the new government was announced as the Moudwana (Family Code). To marry, women no longer require permission from their male guardians. Despite the law’s ban on marriages under the age of 18, child marriages are still taking place.

Due to the loopholes in the law of the Family Code, courts can make exceptions whenever someone wants to marry a minor. Researchers Thierry Desrues and Juana Nieto contend that the Moroccan judiciary system is a conservative system that opposes the essence of the family law; they illustrated that from February to December 2004, 96% of the applications for minor marriage were approved. There was a general recognition that the present legal framework is insufficient or improperly enforced: There are no impenetrable laws protecting girls from being compelled to marry by their parents, even when they are as young as 13 or 14 years old.

Because of the loopholes in the law, and due to the poverty and the financial burden in families, child marriages are still possible. There is still work to be done in Morocco to close all legal loopholes to child marriage. Data from the Moroccan Ministry of Justice and Freedom for the period 2004-2014 reported by UNICEF show that the proportion of all marriages in family courts where minors were involved increased from 7% in 2004  to 11,5% in 2013. However, it should be noted that this data does not take into account unregistered marriages which are abundant in Morocco making it an imperfect estimate of the progress of child marriages in Morocco as a whole. Because of these loopholes in the law, child marriage remains a serious issue in Morocco as the following statistics reveal:

In conclusion, the practice of child marriage remains in small portions of society in Morocco due to legal loopholes, and a potentially large amount go unrecorded. Progressive steps such as reforming the law are already made, these legislations and policy measures have the greatest potential to end child and forced marriage in theory. However, the law is hampered by obstacles such as the loopholes in the family law. Poverty and social norms are reasons why child marriage is happening. It leads to financial and social impacts on a girl’s life and reputation. Easing the burden on society as a whole, particularly in terms of health expenditures and psychological repercussions on girls. Because parents and extended families play such a large part in marrying off girls and young women, education and awareness-raising at all ages is deemed necessary. In general, it must be acknowledged that underage marriage is a complicated issue with social, economic, cultural, and legal ramifications. Legislation alone cannot provide immediate remedies; instead, a complete strategy is required.

The BIGGER Movement (Building the Girls Rights Movement in Morocco) will take a multifaceted approach towards ending child marriage in Morocco, including drafting amended legislation, a national girl survey, grassroots Soar Dialogues to garner a network of communities supporting the cause, an online awareness campaign, and advocacy training for Soar Girls (led in partnership with Mobilising Rights Associates. These activities will culminate in lobbying trips to Morocco’s capital for Soar Girls to meet with national stakeholders, bringing girls’ voices to the table, and providing real traction to close these loopholes once and for all.

Want to read more about our project in Morocco, follow this link:

Kohno, A. (2020, 17 juli). Investigation of the key factors that influence the girls to enter into child marriage: A meta-synthesis of qualitative evidence. PLOS ONE. Geraadpleegd op 10 maart 2022, van https://journals.plos.org/plosone/article?id=10.1371/journal.pone.0235959